Since coming to Seoul, one of the things I wanted to do was to blog a weekly summary of my time here. I managed to do one for the first week but missed the second one! So, here’s a backdated summary of the highlights for Wk 2 out of 104 weeks (2/104), for the memory.

1) My birthday
Week 2 started off with Monday being my birthday. Not going to blog more about it as I had done one entry on it earlier.

At the moment, I’m wondering if there is even a remote possibility that I will be able to be in Singapore next year when March comes along? *hopeful, prays hard* I still prefer to be Home. 🙂

One of the things that we have to submit in order to apply for an Alien Registration Card (basically, it is a foreigner ID that all non-citizens need to have if they are going to be staying for more than 90 days in South Korea) is a chest X-ray. I guess this is because the immigration authorities wanted to ensure that we are not spreading any infectious communicable airborne diseases during our stay here.

The whole process was pretty seamless. We had to register our names using our passports and make a payment for the X-ray service during registration as well. I was so surprised to find how cheap it costs to get an X-ray done over here. I only had to pay a total of 1500 won (that’s like SGD$1.70!) for it. Like… $1.70??! I don’t even get to buy my bread as cheap as that in Seoul! Why is it so cheap?

That said, I don’t really like to subject my body to high frequency radiation as I believe that it is not good for our body cells and made that comment to my friend.

Of course, one shouldn’t say those kinds of things in front of the machine and right before being scanned! That would just jinx the whole process for I ended up having to do the scan twice (yes, being X-rayed twice consecutively. Oh, my body cells! You poor thing!) because my headscarf seemed to have blocked those rays the first time round!

I also finally managed to get myself weighed. Ever since I came here, my diet has changed tremendously. I eat vegetables with either bread/pasta/rice on most days. Should I remember and am willing to wait for the fish or prawn I bought to thaw, I would throw that in and cook it for my meal as well. Hence, I was definitely curious over how this change in diet had impacted my weight.

The weighing scale showed that I had lost even more kilos which puts my current weight at 50kg. I have yet to start fasting which I hope to be able to do this coming week, insyaAllah. So when I do start to fast again, does that mean that I will be shedding even more weight? *worried*

One of the things I set out to do last Friday was to ensure I get myself some meat. The only stores that sell halal meat in Korea are found in Itaewon so off to that place I went.

I managed to squeeze in a proper meal of bokkeumbap (fried rice). It felt like it’s been ages since I had a proper, full meal so I was very, very satisfied at the end of it. I even got to have some soup. Yayyyyy! 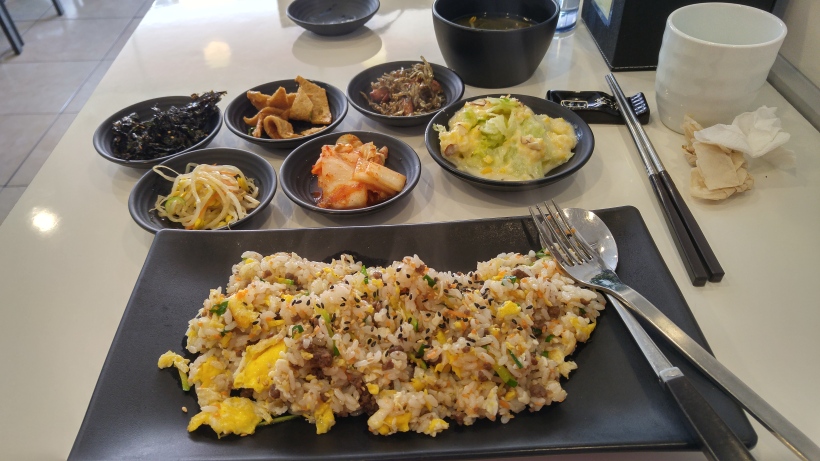 I’ve never been to Itaewon on a Friday afternoon before. Therefore after leaving the restaurant, I was so surprised to walk pass the Seoul Central Mosque and found the road adjacent to it being congested with cars and men making their way to the mosque for Friday prayers. When I saw the throngs of Muslim men walking to the mosque, I can’t help thinking to myself, “Where did all these Muslims come from?“ 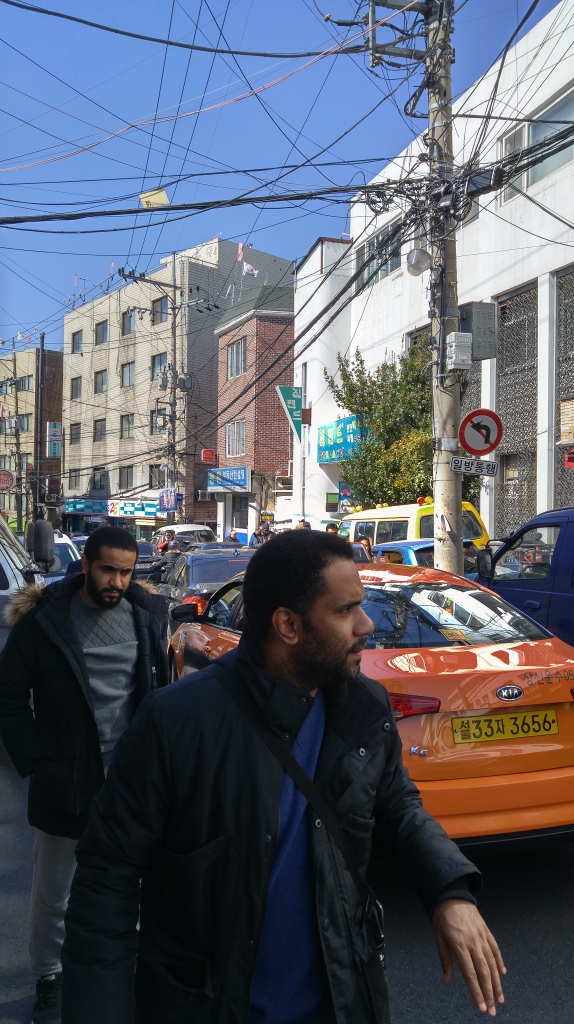 4) Multi-story parking in Korea
I was walking home with one of my housemates when she suddenly stopped by the roadside and pointed out the following structure to me. 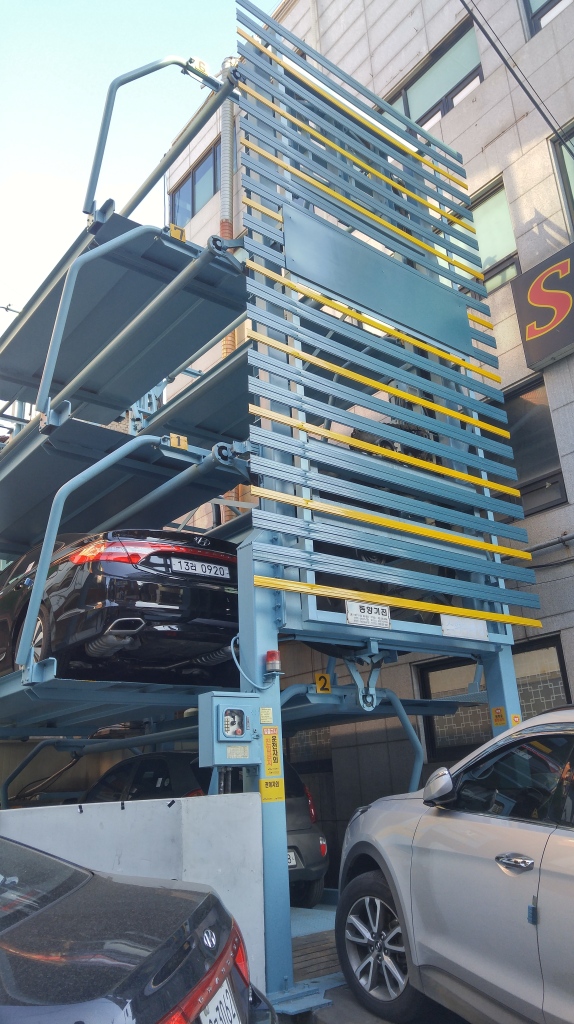 Yep, that unique structure meant for parking found in some places in Korea! I’m pretty curious over how the structure works and hope that the next time I pass by this place, I’d get to see someone either leaving the place or about to park his car so that my curiosity will be answered.

5) Shopping for spring
Spring’s fast approaching. In fact, many Koreans already deemed that it’s now spring. A housemate shared that the spring season here can still be quite cold though it won’t be as frigid as winter. Hence, it would be good to get a thinner outer wear for spring.

Of course I jumped at the chance to shop (although if my bank account could speak, it would probably yell a solid “NO!”) at me.

So at the end of week 2, Sunday, my housemates and I headed to the Express Bus Terminal (more commonly known as Gosuk Bus Terminal in Korea) Underground Shopping Centre. That place is like the Bugis Junction of Seoul. Lots of shops selling clothes, bags and accessories and at a pretty affordable price too.

I spent quite a while trying out various outerwear like the following: 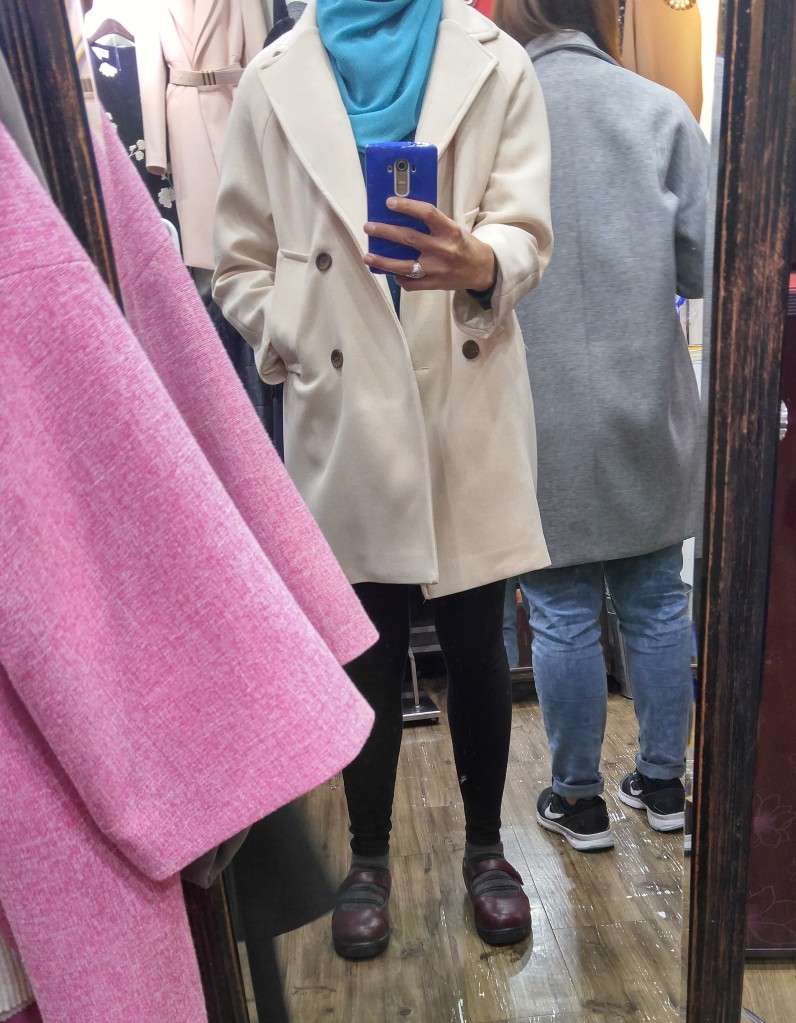 Unfortunately, I think that these long outerwear that are popular in Seoul (and considered a fashion statement!) does that really suit me. In the end, I bought a shorter outerwear in pink . It’s still too big for me and I should probably get it altered but the thought of how I am ever going to communicate to the tailor’s my requests given my limited Korean… Well suffice to say, I just went ahead to wear the too-large-for-my-frame outerwear!

6) Being homesick
I guess it started the day after my birthday. I woke up on that day, a Tuesday, feeling so detached from my family and friends. I told myself that it could simply be because I felt their absence more strongly as they had spent the previous day communicating with me since it was my birthday.

However the feeling grew stronger and for the first time, I made an internet call to my family through WhatsApp. I spent almost 45 minutes talking to my mom and youngest brother on the phone and that made me feel heaps better until last Friday came along I guess.

The Friday I spent at Itaewon reminded me of the last time I was there with my parents. The hotel we stayed in, the places we went to for our meals, and the shops we went to shop at.

I got back home from Itaewon feeling pretty down and severely homesick. I even considered booking a flight back to Singapore as soon as I reached home but alas, I have yet to get a re-entry permit and am not allowed to leave the country. The combination of the frustration of not being able to fly back and missing my family, friends and basically home, made me feel utterly despondent which led to the entry I wrote earlier this week about the new feelings I had.

On the one hand, I was feeling sad. But on another, I felt super lost and like things were out of my control. I couldn’t even do a simple thing like go home. 😦

That caused me to retreat from people and so last weekend saw me struggling to even craft a single sentence reply to my parents and friends because really, I felt even more sad at being reminded of how I’m unable to be with them the more I texted them. It’s like for that moment, all I could ever do was just to text or call them no matter how much I longed for their physical presence. I even felt like I had no right to communicate with them and that I was such a disruption to their lives!

But what lifted me out of that despair and useless negative thoughts were two things, and they came from the most simplest experiences of all:

So yes, those two incidents made me snap back to reality.

I’m back to my usual bubbly self at the point of blogging this and can’t help thinking “Why in the world did I let myself get sucked into all those negativities??!“

Seriously, if my parents or friends decide to abandon me and never talk to me again due to how lousy I had been to them over the weekend, I would not be surprised. I just have myself to blame and should just accept it. 😦

Looking forward to the chance to blog about Wk 3/104 by end of this week!