Week 15 in Seoul was spent checking out two places where I’ve never been before. They are the National Museum of Korea and Hyehwa.

It’s a huge three-story museum which houses various forms of national treasure. The focus of the museum is to display exhibits and trace the history of the Korean peninsular from the prehistoric times right until the Korean War which resulted in the split between North and South Korea.

It was indeed interesting to know more about the different clans – like the Shilla, Baekjae, Balhae, etc – that used to be in power in Korea before all of it was unified under the Joseon Dynasty. There was also a portion of the exhibits that covers the modern history like the annexation of Korea to Japan.

Seeing all these exhibits that date back to tens of years BC that the archaeologists managed to unearth is a humbling experience. To see an exhibit that a person thousands of years ago used and then you reflect on all the time that had passed before we came along reminds me that my existence is truly insignificant when considered within the spectrum of human existence.

If I were to consider my place among the billions of people that have existed within the thousands of years before I came along, I am really nothing. Further, the things I grapple with now like missing my loved ones or trying to complete my assignments are really nothing when juxtaposed to the realities some of the people had to face like war or being in the lower caste in society.

And know what is scarier? It is the thought that not only are you insignificant in this life but also, that you could be nothing to your Creator when you eventually meet Him. That thought is enough to get me to assess myself and whether I have done enough to place Allah swt at the centre of my life.

Seems like I got more out of this museum visit than I had anticipated.

Hyehwa is a small shopping belt just outside Sungkyungkwan University. Not only that, the area seems to be an enclave for many independent concept stores as well as performance/theater halls which showcases their in-house made films or drama productions. Also, since the area is more inclined towards the artistic side, even the products and decor of the stores there reflect that. 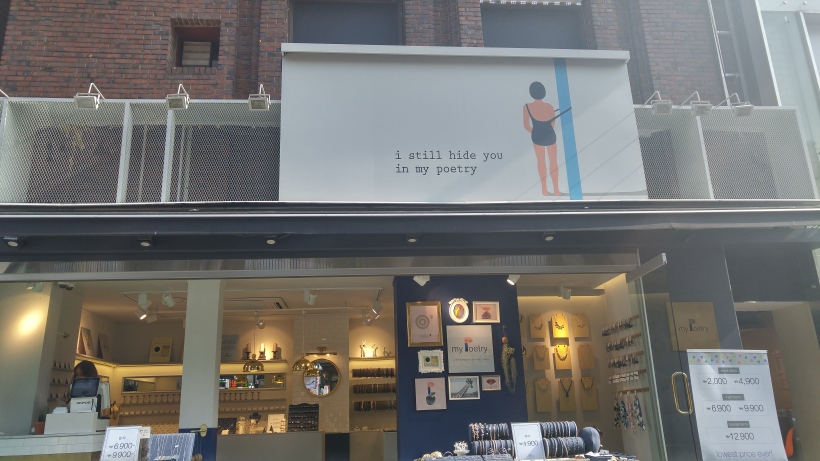